children's book by
Back 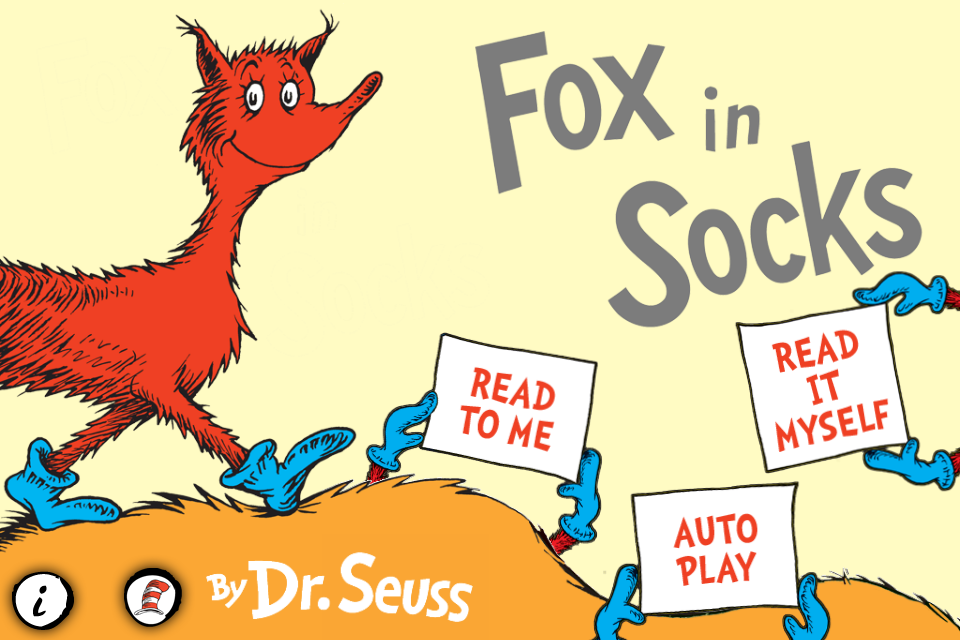 Fox in Sox is a 1965 children's book by Dr. Seuss.  It features two main characters, Fox and his partner Knox, who converse almost entirely in densely rhyming tongue-twisters.  The book in some ways bears a resemblance to Green Eggs and Ham, another book by Dr. Seuss. Both stories contain two main characters: one who is stubborn and wants to be left alone; the other, a persistent and sometimes annoying opposite. 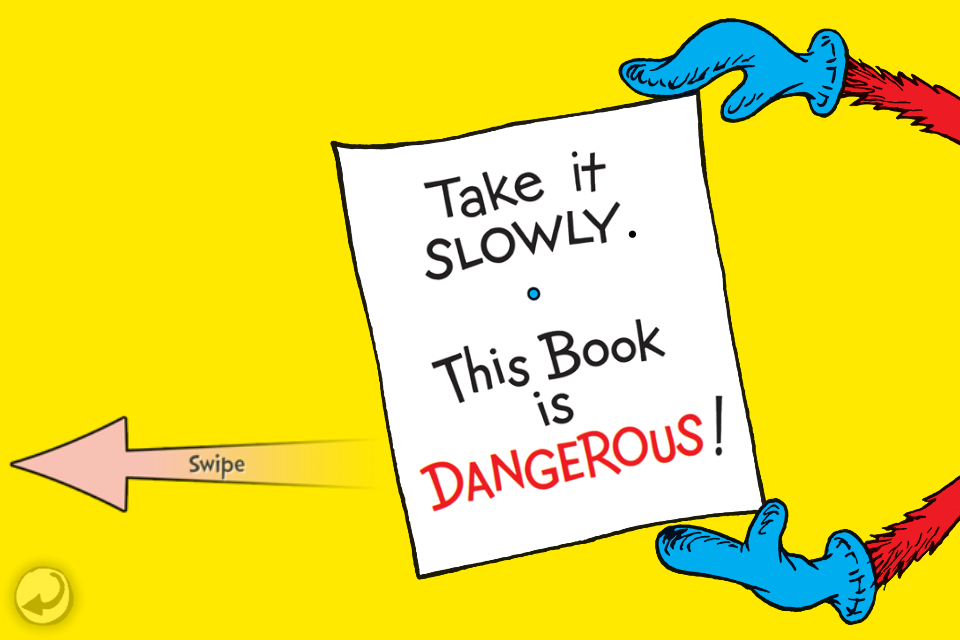 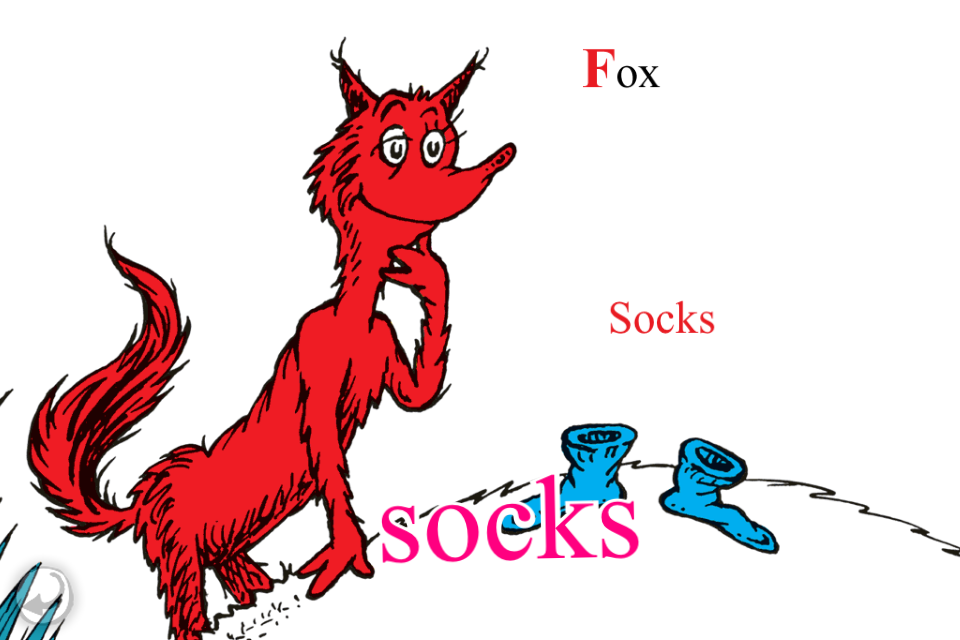 The book begins by introducing the main characters, Fox and Knox (sometimes called "Mr. Fox" and "Mr. Knox") together with some props (a box and a pair of socks). After taking those four rhyming items through several permutations, more items are added (chicks, bricks, blocks, clocks), and so on. As the book progresses the Fox describes each situation with rhymes that progress in complexity, with Knox periodically complaining of the difficulty of the tongue-twisters. 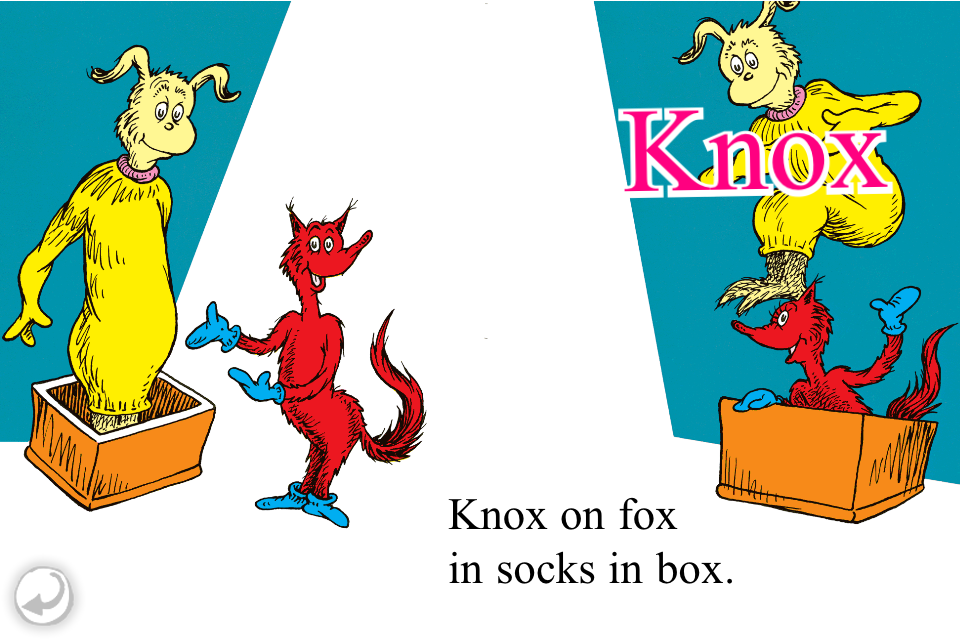 Finally, after the Fox gives an extended dissertation on "Tweetle Beetles" who fight (battle) with paddles while standing in a puddle inside a bottle ("a Tweetle Beetle Bottle Puddle Paddle Battle Muddle"), Knox has had enough and stuffs the Fox into the bottle, reciting a tongue-twister of his own: 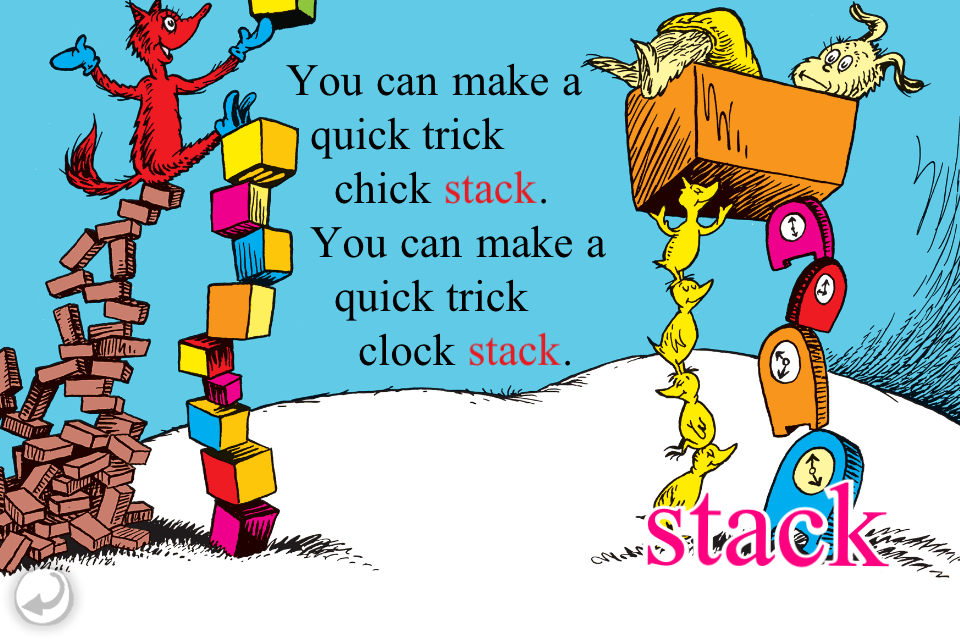 "When a fox is in the bottle where the tweetle beetles battle with their paddles in a puddle on a noodle-eating poodle, THIS is what they call...
...a tweetle beetle noodle poodle bottled paddled muddled duddled fuddled wuddled fox in socks, sir!"

Knox then declares that the game is finished, thanking the Fox for the fun, and walks away while the beetles, the poodle, and the stunned Fox look on.

This and several other Seuss titles aimed specifically at children learning to read were developed in an interesting way. Apparently, a list was compiled of 348 words that were important for first-graders to recognize, then cut to 250 words and the task was to write a book using only those words. They wanted Seuss to "bring back a book children can't put down." Nine months later, using 236 of the words given to him, he completed The Cat in the Hat. [Source:  Wikipedia]